I’m A Member of Celtics Nation 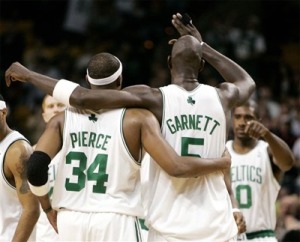 Watching the Celtics crush the Lakers in game 6 of the NBA Finals, I have come to a few conclusions:

1. Kobe Bryant is not in the same galaxy as Michael Jordan. If the Lakers had Jordan in his prime, instead of Bryant, this would have been a different series. (Perhaps this is obvious, but before this series, the comparisons of Bryant to Jordan were frequent.)

3. It’s amazing that Ainge even had a job last year when he assembled this team, and even more amazing that Doc Rivers was still the Celtics’ coach at the beginning of this season. Any other owner would have canned Ainge after the dismal 2007 season, and any other GM under the pressure that Ainge was under would have scapegoated the coach. These guys — Grousbeck, Ainge, and Rivers — stuck together and now they have an NBA Championship. I love that. Will Eddie House be the GM of the 2030 NBA Champion Celtics?

4. The Lakers-Celtics rivalry of 2008 isn’t even close to what it was in the 1980s, though the press tried to remake that ’80s rivalry prior to this series. The Lakers teams of the ’80s were stocked with hall of famers and this Lakers team has one great player. Everyone knew back then that those Celtics and Lakers teams were among the best teams in NBA history and future. And there was a lot of animosity between those Celtic and Laker players. There’s no Kurt Rambis on either of these teams, and I haven’t seen one jawing match between a Celtic and Laker this entire series.

5. Kevin Garnett became one of my favorite athletes of all time after about 1/4 of the regular season. I don’t think I’ve ever seen a Boston athlete with his level of intensity. Pedro Martinez is the only one who comes close. And the Celtics haven’t had a player whose ONLY focus was winning since Larry Bird. Garnett couldn’t care less about his stats, about winning awards, about making the all-star team. All he cares about is winning, and he understands that winning requires a total team effort. He taught this team how to be a TEAM, and as a result he helped his teammates achieve their highest individual potential. What a gift Garnett has been to Boston’s sports fans — just to see how he approaches every game.

6. I love that the Celtics are playing hard right to the end of this game. They are playing with joy and pride, as though this is the last time they will play together for the rest of their lives. They are playing as though it’s really, really fun to be acknowledged as the best team in the NBA. They are playing like they want to leave no doubt that they are the champions. They are showing any kids who are awake to watch (approximately seven across the country — thanks ABC and David Stern!) how to finish a game – and a season – strong.

7. Can you believe this team was forced to play seven games against the Hawks in the first round, and seven against the Cavs in the second round?

8. I haven’t attended a Celtics game since 1991, when I was given a comp ticket by my cousin, Walter Palmer, who was a center for the Utah Jazz at that time (second round pick in the 1990 NBA draft). Wish I could’ve been there tonight.

No East Coast Kids Saw This

There are two minutes left in game four, and the Celtics are up by 4. The Celtics have just overcome a 24-point deficit, on the road, for one of the greatest comebacks in NBA Finals history. My 9 year-old son would have loved to have seen this. Too bad the game started an hour after his bedtime (though we let him stay up, and he made it through the first quarter before passing out on the couch). A whole generation of future Celtics fans is missing the creation of new Celtics legends — even if they want to see it live. They’ll have to settle for seeing the highlights on Sports Center tomorrow. I know it’s a business. I know that’s why the games start so late (9:00pm) and end so late (about 11:45pm). I get it. That doesn’t mean it’s not a real shame, though.