On the eve of Truck Day, I don’t have to think too hard to answer this question… a description of what my life has been like the last couple of months will suffice. 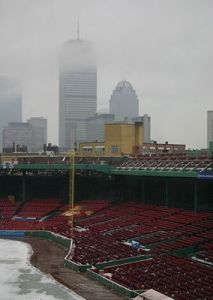 Without baseball, the daily newspaper has no treat inside. No box scores? No interest.

Without baseball, the flat screen on the wall of the family room is a shiny gray ornament. The remote is stashed deep in the coffee table drawer.

Without baseball, I have to make up things to do at night after I put the kids to bed. Read a book. Clean the furnace room. Eat a big bowl of cereal. Write a blog article about life without baseball. Watch the Baylor-Oklahoma basketball game on ESPN. Strum on my guitar. Go to bed early.

Without baseball, there’s no temptation to manage my online fantasy baseball team when I need a mental break. Instead, I just trudge up and down the hill outside my office and think about calls I have to make.

Without baseball, I lose touch with my dad, my brothers, and my sister. The Red Sox are our family’s lifeblood.

Without baseball, lunch conversations with colleagues are hard to sustain for more than five minutes. There’s no game to talk about. No slumps to analyze. No standings to lament. No managerial moves to criticize. No rookies to compare to Dewey, Fisk, and Nomar.

Without baseball, my multiple Rawlings gloves lie in a bin in the cold garage. I sometimes put one of them on for a moment when I’m putting trash in the garbage cans.

Without baseball, the kids don’t beg me to play catch or wiffle ball with them when I get home from work. They don’t beg me to do anything. There are no little league teams to coach. No fungoes to hit.

Without baseball, there are no extra-inning, West Coast games to keep me up until the middle of the night. I am well rested. Yet restless.

Without baseball, the magnet that draws me to Fenway Park shuts down. No one calls with an extra ticket. I give away my Charlie Cards for the Green Line.

It’s February 11. Hot stove talk is dead. My backyard is a frozen tundra. There hasn’t been a major league baseball game in over three months.

But Truck Day is finally here. Spring training won’t start for another week, but just knowing that the Red Sox’s baseball equipment is en route to Fort Myers will improve the quality of fans’ lives in a measurable way.

Allelulia! Life without baseball is almost over! In about 50 days, they’ll be Shipping Up to Boston!

Down twenty to nothing…

“I have a feeling,” I said, sitting in the bleachers with other parents of the Jazz, our 9 and 10 year-olds’ winless (0-5) basketball team, this past Sunday. “This is going to be the day they get their first win. This is our day.” But no one believed me. Not even I believed me. The other team, the Nets, looked bigger. And better. Just like every other opponent we’d faced. And within 30 seconds of the opening tip-off, the Jazz trailed the Nets, 4-0.

Then it was 6-0, 8-0, 10-0. “Come on guys, let’s score a basket!” cheered the Jazz’s coach from the bench. But the Nets stole the ball and hit an easy layup. 12-0. Then 14-0. “The Nets are shooting at 90%,” a Jazz parent observed. 16-0. 18-0. And with one second remaining in the first quarter, a Nets player took a shot from just inside the three-point line. Embarrassed by the gory slaughter that was taking place on the court, even the Nets’ coach hoped that the shot would miss its target. The buzzer sounded, and a moment later, the ball swished through the net.

20-0. That’s twenty to NOTHING after one quarter of play.

“A typical scoring total for an entire game at this level is 30 points per team,” said one parent. “And they have 20 in a single quarter.”

“At this rate, we’re going to lose 80 to nothing,” observed the mom sitting in front of me, with a smirk.

“Hi, honey,” I heard one dad sigh into his cell phone. “Well, they’re losing twenty-zip, so I’m not sure it’s worth the trip.”

Then my cell phone rang. It was my wife, calling to discuss the schedule for the rest of the day and transportation logistics for our five kids. “How’s the team doing?” she asked after we’d discussed the plans.

“Well, they’re losing 20 to nothing after one quarter,” I answered.

“Not again,” she replied. “Do you think they’ll win a single game?” Then, the Jazz hit a layup. Every parent in the gym cheered with relief.

The most memorable comeback I ever saw in person was the Red Sox’ remarkable win over the Tampa Bay Devil Rays in Game 5 of the 2008 ALCS at Fenway Park. Down 7-0 going into the bottom of the 7th inning – and facing elimination from the series – the Sox clawed their way to victory. I know “Game Five” is my most memorable comeback because it’s the first one that popped into my head yesterday as I watched the final three quarters of a youth basketball game that took my breath away and left me shaking my head and grinning the rest of the day.

The second and third quarters are a blur in my memory, so I’ll quote the text messages I sent to my wife.

(It was during halftime I remember saying to a few other parents, “Can you imagine if they came back and won this game? For the rest of our lives, whenever we’d see each other in town, we’d say to each other, ‘We were there for the greatest comeback ever.'” We all laughed.)

“Unreal,” I replied to her reply.

At this point, the referee – who reminded all of us of Gene Rayburn, the host of ’70s TV show, The Match Game — held the basketball, walked over to the bleachers where parents were sitting, and said to all of us with a big grin on his face, “Raise your hand if you’re nervous.” A few hands went up. “All of you who didn’t raise your hands are lying!” he said, smiling.

Knowing that I was (perhaps) witnessing one of the greatest comebacks in 4th and 5th grade sports history, I videotaped the final two minutes of the game on my iPhone. The Nets’ coach called three timeouts, the Jazz coach called one — and these are the only timeouts I’ve seen ANY coach take during the entire season so far. This was a run-of-the-mill, regular season youth basketball game between kids whose tank tops fell to their knees, but these two coaches (volunteer dads) suddenly realized that this game could be one that they and their players would remember for a very long time. And they wanted to win. Badly.

With the Jazz up by two, 38-36, with 30 seconds to go, the referee walked back over to the bleachers and yelled up to the parents and kids on the second level who had recently arrived and were waiting to use the court next. “Hey you guys up there!” he called, “I wanted to let you know, the white team had a thirty-six to nothing lead. So half the parents on the white team went home, because they thought the game was over. And we had to get them on cell phones, we texted them, we brought them all back!” He was clearly savoring this unique sports experience as much as anyone.

The Nets fouled. And fouled. Until they were finally over the limit and the Jazz went to the free-throw line for a one-and-one with 15 seconds remaining. And the 4 ft 8 in, 10 year-old Jazz player (#31 below, on the right) hit BOTH shots, banking them in off the backboard. (To put this feat in perspective, 9 and 10 year-olds shoot about 20% from the free throw line…and about 3% when they’re nervous. Maybe he was too naiive about what was happening to be nervous? Or maybe, just maybe, he had “ice in his veins” and was truly clutch.) 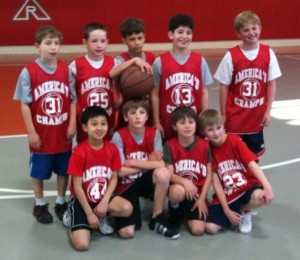 The kids went crazy on the court. My son jumped on the back of a smaller teammate who was caught by surprise, and they crumpled to the ground in a heap of joy. The Jazz coach suddenly produced a camera and started taking pictures of the boys’ celebration. The teams shook hands. Two Nets players wept as they found their parents in the bleachers and put on their coats to go home. Meanwhile, everyone wanted to take a picture of the Jazz players. They lined up and posed for about ten cameras. Click. Click. Click. Click.

Jazz parents didn’t know how to react. Is it OK to marvel at the outcome of a 9 and 10 year-olds’ basketball game? No one high-fived, though we wanted to. There were a few slaps on the back, and we all shook our heads and smiled. “That’s one of the greatest comebacks I have ever seen, at ANY level,” I said to the Jazz’s coach.

“Yes, well there was the Red Sox comeback against the Yankees in 2004,” he replied.

And just like that, this Jazz-Nets basketball game was “on the list” — along with Frank Reich’s Bills, Doug Flutie’s Eagles, Mookie Wilson’s Mets, and David Ortiz’s Red Sox.

I’ve written it before, and I’ll write it again: Some of the greatest sports moments of the day never make it onto ESPN’s Sports Center. Yet on backyard rinks, on dusty fields, and in tiny gyms across America, every day another sports drama unfolds that teaches its participants – and its other witnesses – that “you gotta play the game,” and “anything can happen.” I could tell my son a million times to never give up, to keep the faith, to grind until the end…. and now, thanks to this one game, that attitude will forever be in his blood.