Did You Expect “Manny Being Yaz?” 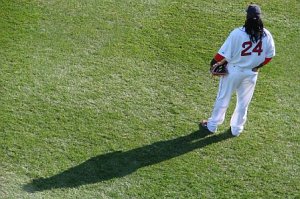 veryone is furious with Manny Ramirez because he asked for a day off on Friday night (our first game of this important series vs. the Yankees) saying his knee hurts. Dan Shaughnessy captures the controversy well, writing in today’s Boston Globe, “Something’s got to give. The owners are mad. The manager is frustrated. The GM is frustrated. Teammates are angry. Even with sycophants who excuse everything, Manny may have finally exhausted his reservoir of goodwill. He quit on the team in 2006 and now it looks like he’s quitting again. Is that OK with you, Red Sox Nation?”

Well, I certainly don’t speak for Red Sox Nation, but as the VP of RSN, I have two reactions to this whole Manny situation.

1. We can believe that Manny is telling the truth about his knee, or we can believe that he’s lying about it (or exaggerating). Either way, none of us knows whether his knee is truly hurt or not, so we might as well TRUST Manny. Why? For the simple reason that there is no good that can come from doubting him. And even if his knee isn’t sore enough to miss a game, the guy obviously has SOME reason that he needs a day off, a reason big enough to ask for a day to recover (and possibly even lie about an injury), so let’s just give him his day off and move on. We’d rather not play him anyway if he’s not feeling motivated and can’t get motivated. There’s no point in doubting Manny, and since the only data we have is his word, we might as well trust that. 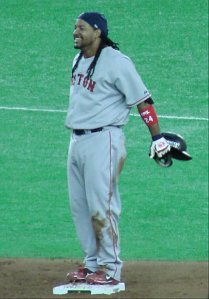 2. Hello, sportswriters, team ownership, front office, and Red Sox Nation, is this whole “I need a day off” stuff from Manny really still surprising you? Did you think that Manny would suddenly undergo a metamorphosis this season and beg to play 162 games? Why haven’t we gotten over the outrage at this point and just accepted him as “Our Manny” and saved ourselves from the bother of getting angry every time he acts like…. Manny.

There’s a code of athletic conduct that I grew up with, and that’s part of the culture of U.S. professional sports, that says, “The team is the most important thing,” and “When you’re hurt, you play anyway, dammit.” But guess what? Manny didn’t learn this code in his childhood, and it hasn’t grown on him during his years in the Big Leagues. He’s a different animal. Way different. We all know this about him. So why do we keep driving ourselves crazy by getting mad at him? It’s sort of like getting mad at a two year-old for drawing on the walls with a crayon. That’s what two year-olds do. All of them. And that will never change.

Of course, the difference between Manny and two year-olds is, two year-olds learn to modify their behavior to comply with society’s norms. Manny never will. He’s a grown-up now, this is who he is.

But please also keep in mind that the very personality flaws that some of us find so frustrating in Manny also contribute to his greatness. There’s never been a more carefree, happy-go-lucky player, and I believe that that state of mind is a big reason why he’s so cool under pressure. Two strikes, two outs, down by a run in the bottom of the ninth with a runner on second? The whole stadium might be freaking out, but not Manny, he’s just chilling out in the batter’s box, looking for a pitch he can drive. And we all know, he’s better at this than 95% of all Major Leaguers. 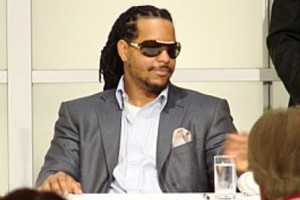 Am I excusing Manny’s occasionally bizarre behavior just because he’s a Hall of Fame hitter? No. But Manny is a complex package, and after eight years with the guy, it’s a package we should all know well: Manny drives in runs. In the outfield, Manny waves to fans between every pitch. Manny demands days off regardless of the game’s importance. Manny strikes fear into every pitcher he faces. Manny enjoys himself all the time, even when he’s just made a huge error. Manny stands at home plate to admire his home runs. Manny sells grills on e-Bay. Manny is always among the league leaders in outfield assists. Manny rarely breaks a sweat running to first base. Manny doesn’t talk to the media, and when he does, he says the “wrong” thing. Manny is one of the greatest right-handed hitters of all-time.

If Theo Epstein thinks the Red Sox will win more games without Manny, he should trade him or not pick up his option for next year. (In Theo, I trust.) But please, no more outrage, no more surprise….. unless you really expected that someday we’d revise our favorite Manny phrase to, “It’s just Manny being Yaz.”

In November, 2007, I posted a great story about Manny being a good guy, a story that my father received in an email from a friend of his who randomly spent 15 minutes chatting with Manny following the 2007 Rolling Rally. It’s entitled, “Manny Being Magnanimous.”

15 responses to “Did You Expect “Manny Being Yaz?””