All-Stars Under the Stars

No, the Vice President of Red Sox Nation did not get a ticket to the All-Star Game at Yankee Stadium. Old friend Hank Steinbrenner never called. Neither did any of my other pals in New York. And as the day of the game approached, I dreaded the possibility of sitting on my couch and experiencing another baseball game on TV with the third grade-level commentary of Tim McCarver and Joe Buck. (Why doesn’t Remy ever get these national gigs, like he should? And doesn’t it make you laugh the way Joe Buck looks at the camera and smiles in precise 6-second intervals when McCarver is speaking?)

But my prospects brightened when I received an email from my son’s summer day camp: “Come watch the All-Star Game on an eight-foot screen under the stars — 7:00pm Kids’ Candy Ball, 7:30pm Kids’ Home Run Derby, 8:30pm Game Time. Popcorn, hot dogs, watermelon, and lemonade will be served. $5 per person.” Frankly, this sounded even better than a long trip to and from New York. And with all due respect to The House That Ruth Built, I’d have paid more for this “camp” baseball experience than for a front row ticket to Yankee Stadium from a scalper.

When I arrived at the All-Star event with my nine and six year-old sons, about 40 kids had gathered on the field for a game of “Candy Ball” — a game I had never heard of until then, which is odd because it’s just about the most enticing game for kids that’s ever been invented. The way this works is, one adult holds a tennis racket and whacks a tennis ball high into the air above a crowd of kids. All the kids gather under the ball as it dives towards Earth, smiles on their faces, then they all leap at the same moment to try to catch the ball. The player who DOES catch the ball (before it bounces) runs in and digs a piece of candy out of a big white bucket. (It’s a fabulous game for tall kids, and a really demoralizing one for short ones.) 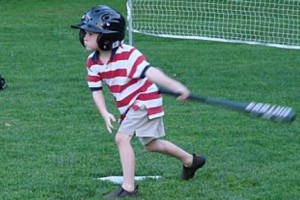 Then came the Home Run Derby. With visions of Josh Hamilton in their heads, all kids got to take seven swings at slow lobs, and while most didn’t come close to hitting a baseball over the stone wall (perhaps 100 feet to the left and right field poles, and 150 feet to center), a few hit one to two dingers. My favorite moment was when my six year-old son took his whacks. He was (by far) the youngest kid there, but he stood up there and swung a heavy aluminum bat with all his might, and on his fifth swing he hit a line drive right back at the pitcher’s head (see photo). Pride and dignity swept over his face after that frozen rope.

The All-Star Game itself, the main event, was pretty cool. The kids and their parents gathered on a small grassy hill that looked down on a soccer goal, onto which a huge white sheet had been duct taped. A small silver box projected the game onto the sheet, and as the sky got darker and darker, the image on the sheet became sharper and sharper. A crowd of kids gathered at the very front and cheered loudly when Sox players were introduced. Of course, Yankees players were booed vociferously.

Three moments from the player introductions stand out. After the boos for Derek Jeter died down, I overheard one child wearing an Ortiz t-shirt say to the kid sitting next to him, “He’s my favorite Yankee, and I still hate him.” And when Kevin Youkilis was introduced, the whole crowd on the hill howled “YOOOOOOOOUK!” (What a stroke of luck for a player when he has a name that rhymes with “boo.” Remember the way we cheered for Lou Merloni? And when the fans ARE booing you, you can remain happily ignorant.) The most surprising moment during the team introductions was when Terry Francona trotted out of the Yankee Stadium dugout. He got the loudest cheers from the kids and adults assembled there — louder than Manny’s, louder than Youk’s, louder than Pedroia’s. The man is a true rock star.

Yeah, it would have been amazing to be in Yankee Stadium for all the farewell fanfare, to cheer for our hometown guys, and to see a great all-star game in person. But I was even happier being right where I should have been — with my kids, along with a herd of young Sox fans and their parents, sitting on a blanket about two miles from Fenway Park, under the full moon, watching the game on a bedsheet while munching on popcorn and watermelon, after a game of Candy Ball and a Home Run Derby.

One response to “All-Stars Under the Stars”