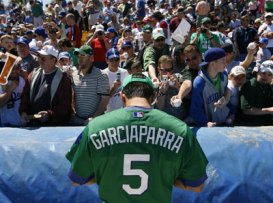 OK, put yourself in my shoes, and tell me WHAT WOULD YOU HAVE DONE?

I was sitting beside my six year-old son on a grassy hill in deep left field during the late innings at a Dodgers-Red Sox spring training game in Vero Beach, Florida. I noticed #5 of the Dodgers signing autographs next to the wall beside first base. I recalled how powerless I felt when, on the plane to Florida, my son said his main goal of this special trip was to”get Nomar’s autograph.” I wasn’t sure how long Nomar had been signing – would he quit in ten seconds? – and the pack of fans around him was large. I knew that if I pointed out Nomar to my son and then he failed to get an autograph, he would be crushed. I knew that if I didn’t tell my son about Nomar being over there, he wouldn’t notice and our pleasant day would continue, undisturbed. Looking across the vast stadium at Nomar, I calculated the chances of getting his autograph at about 10%. WHAT WOULD YOU HAVE DONE?

I decided 10% was high enough to give my son’s dream an outside shot. I pointed out Nomar to my son and asked if he wanted to run over to the other side of the park, emphasizing that Nomar might stop signing any second. “Yeah Daddy, let’s go, NOW!” And we started running. (Insert Mission Impossible theme song here.)

I decided to teach my son how to get an autograph. “Listen,” I said, “If you want Nomar’s autograph, go down there and slither like a SNAKE to the front of that pack, then stick your glove right in front of Nomar’s belly button. Do you understand?”

“But Daddy, that’s cutting,” he said. (What a good boy.) It was time to teach him about the cutting exception. 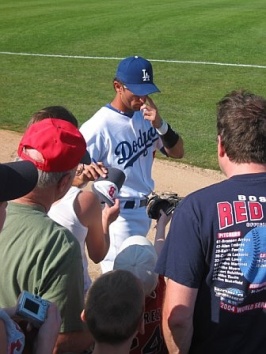 pack, and that’s OK. That’s the law of autographs,” I explained. “Now GO.”

And off he went. Slithering better than a snake could slither. I don’t think he touched anyone on his way to the front, right in front of Nomar, where he thrust his glove towards Nomar’s belly button (see left). Nomar handed a hat back to a girl, adjusted his sunglasses, looked at the outstretched arms before him, smiled at my son, then took his glove and signed it with his blue Sharpie.

A MIRACLE! A boy’s impossible spring training dream come true. I wish I could describe the look of wonder he had his face. Although that autograph has almost completely faded from my boy’s ragged glove, the memory will always be vivid. (And Nomar remains one of my favorite four athletes of all time.)

One response to “Mission Impossible: Getting Nomar’s Autograph”