20 Presidents at Game On! 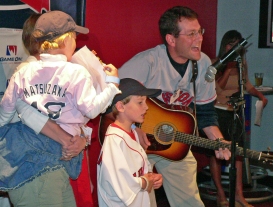 All of us who attended the Red Sox Nation Presidential Campaign Event at Game On! last night had a lot of fun. The event featured three-minute platform speeches from 20 of the 25 “finalist candidates” who were able to attend, and was hosted by Hazel Mae and Dr. Charles Steinberg.

While singing I’m A Member of Red Sox Nation with my son, niece, and friends, Big Papi cranked a triple vs. Tampa Bay on the large screen TVs (nope, those cheers from the crowd were not for us). The platforms and personalities of the candidates were incredibly diverse, yet when we all got up on stage together to sing “Sweet Caroline” at the end of the night, there was not a shred of competitiveness in the room. Slapping each other on the back, we all knew we were in the company of family members we just hadn’t met before. We were all related in a way that reached to the core of our identities. It was like meeting long lost brothers and sisters, all of us sharing the same genetic neuroses, the same obsessive passion for baseball, the Red Sox, and Fenway Park.

It was a privilege to share the stage with Hall of Famer, Peter Gammons, and I enjoyed meeting Sam Horn, who is a truly classy guy and gave a rousing speech. And 18 year-old Will French, born in Connecticut and now living in Rye, New York, stole the show with his raw humor. Pretty much the only thing missing at the event was negativity, which made it feel strangely un-Red Soxian. Is this what it feels like in Anaheim sports bars?

If I were running this thing, I’d end the campaign now and appoint all 25 finalists, or hold an election to solidify a group of 10-15 “presidents.” Multiple presidents could serve the fans, and the Red Sox, much better than one person could. “President of Red Sox Nation” has a nice ring to it, but given that the Nation isn’t a government and doesn’t really need a single decision-maker, wouldn’t everyone benefit more from a group of RSN presidents reflecting all kinds of RSN diversity and points of view? I’d hate to lose the sense of shared purpose, enthusiasm, and camaraderie we started to cultivate on Tuesday night. And how can Rem Dawg, Peter Gammons, and Sam Horn NOT have a role in this first “administration?”