atriots’ Day was established as a Massachusetts (and Maine) civic holiday to commemorate and celebrate the Battles of Lexington and Concord, the first battles of the American Revolutionary War. And in Boston, we know how to celebrate our history in style — a Red Sox game at Fenway for breakfast (11:05am start time), and the world’s coolest foot race (Boston Marathon) for lunch.

Today, I was lucky enough to attend the game with two of my children (9 and 6) and their friend (9), enjoying a rare Monday day game while kids in other states across the country were busy toiling away in school. And after Delcarmen nailed down the final out, we walked three miles from Fenway to Cleveland Circle, cheering on those runners at the back of the pack, the ones who needed our wild cheers the most. 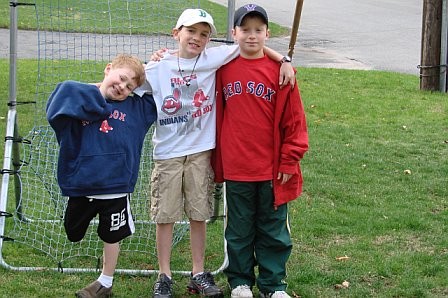 At 9:00am, my boys and I picked up a friend and posed for our first photo of the day.

Daddy needed a cup of coffee, so a quick stop at Dunkin’ Donuts was required. The Papelbon poster got us into the mood for the day.

We parked the car at a friend’s house near Cleveland Circle, and the small plot of green grass in the front yard meant that forward progress towards Fenway would have to wait for a few minutes…. boys will be boys.

The Reservoir T-stop was crawling with Red Sox fans…

… and we squeezed close together on the train to make room for Sox fans getting on at subsequent stops. 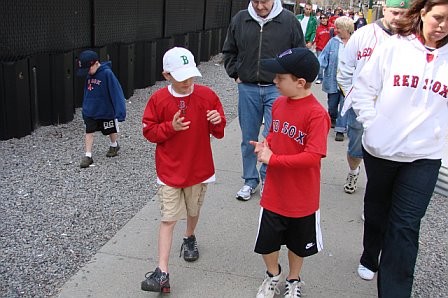 The walk from the Fenway T-stop to Yawkey Way is one of the great walks in North America.

The goosebumps get huge when you get to Brookline Avenue and see the crowd outside Fenway.

This was my six year-old’s first game at Fenway (since he was too young to remember anything), so I taught him to hold his hand over his heart during the National Anthem. He sang at the top of his lungs.

After two innings, my six year-old started getting restless. Hot dogs and pizza helped a little. But what he really wanted (and needed, it turned out) was a Red Sox #1 foam finger!

Let us not underestimate the power of the foam finger! To a six year-old, it can provide hours of companionship, entertainment, and enjoyment! 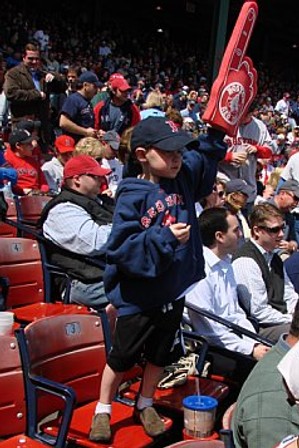 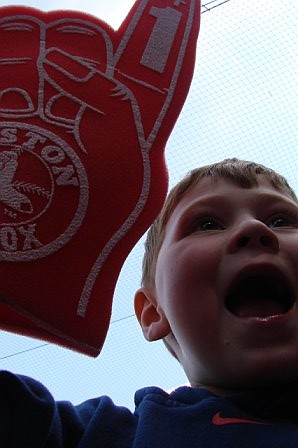 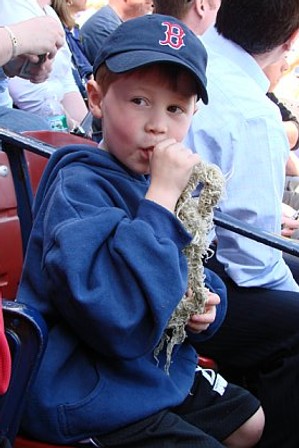 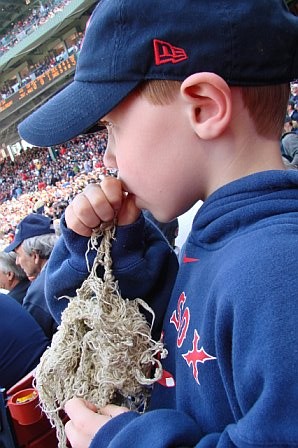 Then, in the fifth inning, it was time for…. the blankie!

By the 8th inning, many of the seats had been vacated, so the boys headed down to the very front, where they sang “Sweet Caroline” and cheered the Sox to a sweep of the Rangers. 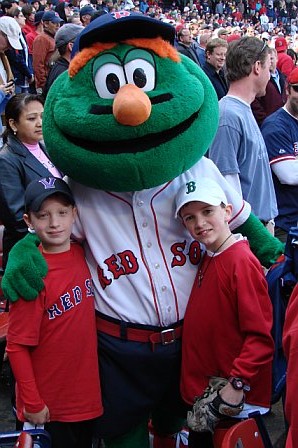 What would a perfect Patriots Day be without a greeting from Wally the Green Monster? (The six year-old is not pictured here, because he was sobbing about his blankie, which he’d dropped into a puddle of beer.)

And I honestly can’t remember the last time I saw a player signing autographs at Fenway Park…. but after the game, Josh Hamilton of the Rangers signed for one and all… and made it an extra-special day for a lot of kids. 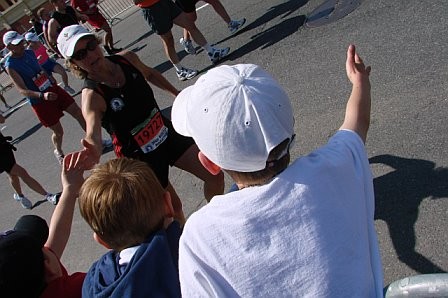 Then, it was time to head out to Beacon Street to cheer on the marathoners! 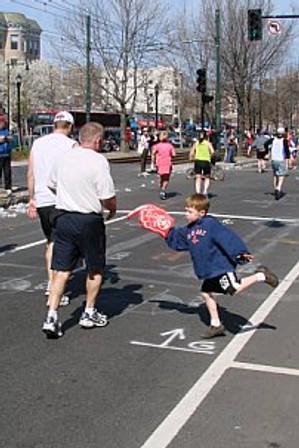 Petting the dog wearing the Kevin Garnett jersey was a highlight of our long walk from Kenmore Square to Cleveland Circle. And at the end of our walk, my six year-old proclaimed, “My feet ache all over. But that was the best day of my LIFE!”

A Monday without school, a day spent with family and friends, four hours at Fenway Park on a sunny day, a Red Sox win, the opportunity to high-five courageous runners as they near the finish line of a long, grueling race, and memories to last the rest of the year and longer. What’s better than that?