(“Wa” is a Japanese term meaning “unity and team spirit.”)

What a way to start the season! I officially lost my voice when Brandon Moss hit that game-tying home run in the top of the ninth inning off of Oakland’s ace reliever, Huston Street. How about that — a rookie gets an unexpected start on Opening Day

and makes it his best Major League game of his (short) career. Awesome.

Some observations about the fan experience:

1. I was very surprised at the relatively modest applause that Matsuzaka received at the beginning of the game. (When I say “relative,” I mean relative

to the kind of cheer that even someone like Dave 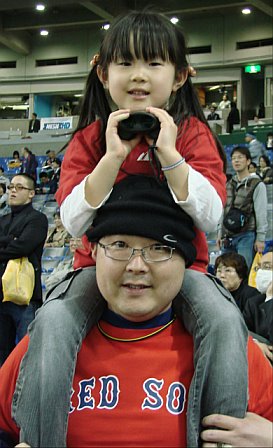 Roberts or Doug Mirabelli would receive upon returning to Fenway Park.) I expected the noise and excitement level to be so high, Tokyo Dome’s roof would blow off. Not even close. The fans’ applause was certainly enthusiastic, but definitely not memorable.

2. Once again, I was sort of unnerved by the total silence between pitches in the

first through third innings. Each pitch felt like (and sounded like) a serve at Wimbledon. All of us in the Red Sox Nation section half-expe 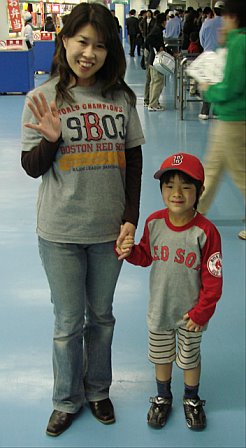 cted an usher to kick us out when we cheered loudly for Youk, or Lowell, or whomever. But the place erupted when Okajima took the mound in the ninth, and the Dome stayed loud

3. The Japanese fans at Tokyo Dome were eager to celebrate with the fans from the U.S. during and after the game. They came over in waves to give us high-fives. While spontaneous, it was a very welc 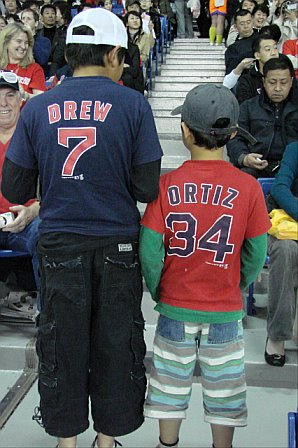 oming gesture and an exhilarating cross-cultural experience for all inv

o strong in Japan that how hard a man tries is considered by many to be the ultimate measure of his worth. Results are almost secondary.”

5. After seeing the variety of Red Sox players’ names and numbers on the backs of Japanese fans’ t-shirts, I do not buy into the idea that Japanese fans are only fans of the Red Sox because of Matsuzaka and Okajima or because we recently won two World Series. Yes, 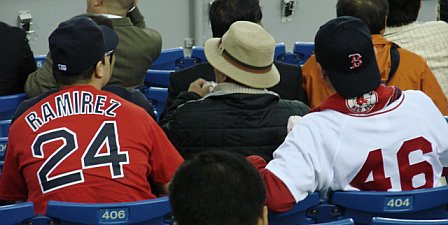 Daisuke’s and Okie’s shirts are popular, but equally popular are Ortiz and Ramirez shirts. And I saw severa

l Garciaparra shirts and Clemens (Red Sox) shirts. Being a huge Nomar fan myself, I went up to all those Japanese fans wearing #5 and

6. And finally, if I were Hank Steinbrenner, I’d be very worried about falling way behind in the

global competition for fans. He can call Red Sox Nation whatever he wants to call it, but it doesn’t change the facts. The Red Sox have become an irresistible international sports 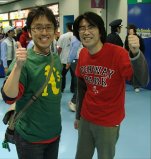 franchise whose popularity transcends the particular names on the roster, and little children around the globe are growing up chanting “Let’s Go Red Sox!” before they’ve even heard the word Yankees.

Certainly Japan, as these photos show, is squarely in the center of Red Sox Nation (although I did see one bold Yankees fan, who politely allowed me to photograph him for this blog… and there were some A’s fans too… so in the spirit of journalistic integrity, here they are).