What I Love About Baseball

The leathery-dirt smell of a Rawlings baseball glove. The feel of a high-seamed baseball under my fingertips. Kids imitating their heroes’ batting stances. Defensive replacements in the 9th inning. The allure of an expansive green lawn. The thwack of a fastball slamming into a catcher’s mitt. Luis Tiant. The count. Inches. Emphatic umpire’s calls. Outfielders throwing bullets over long distances to a precise point in space. The pivot at second base. Stealing third. A catcher nailing a would-be base-stealer at third. Acrobatic centerfielders. Baserunners flying at full speed at the crack of the bat, with less than two outs, knowing the line drive will drop in. Earl Weaver. Fielders balanced on the balls 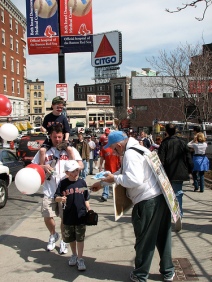 of their feet as the pitch is delivered, imagining infinite possible outcomes. It’s every day. The black of the plate. Jason Varitek. No-hitters. Extra infield work. Broken-bat singles that end a slump. A perfectly executed suicide squeeze. A totally botched suicide squeeze. Anticipation and hope in the bottom of the ninth inning. Peter Gammons’ old baseball columns in the Sunday Globe. Big league dreams in the imagination of a nine year-old. The scoop at first base. A pick-off at second base, in slow motion. Taking the first pitch, all the way. Taking the 2-0 pitch, all the way. Purposefully moving the runner over. Catchers who frame the pitch just inches off the plate, and umpires who don’t fall for it. Jackie Robinson. Two-out RBI hits by the player the pitcher preferred to face, following an intentional walk. Meaningless chatter when managers visit pitchers on the mound, and umpires who go out to “break it up” after ten seconds. Dewey nailing a baserunner at third. Batters who sprint to first base after getting drilled in the back, expressionless. Stealing home. Catchers who back-up first base. Curt Schilling in the post-season. A 3-2 change-up….three times in a row. Grown men playing a child’s game. The Red Sox. Players who talk to, smile at, or wink at fans while in the on-deck circle. Catchers who block the plate, and baserunners who barrel into

catchers blocking the plate. Old men and women who keep score, every game. The marvelous sensation of my bat connecting with a ball on the sweet spot. Listening to the game on the radio – in my car, in my kitchen, on the beach. Take Me Out To The Ballgame. Fenway. Wrigley. Eliot Playground in Brookline. Hot dogs. Kids who wear their gloves in the stands and expect to catch a foul ball. Putting on a baseball cap and transforming into myself. Pennant races. Dr. Charles Steinberg’s “Path of the Fan Experience.” Pitchers who use numerous arm angles. The knuckleball. Baseball Tonight on ESPN. The expression on a kid’s face when he/she walks up the ramp into a major league baseball stadium for the first time. Cal Ripken. Poring over the sports section, 365 mornings a year. Fathers and mothers playing catch with sons and daughters in the driveway. Hitting fungos to my brother on a 90-degree day…. just one more. Rem Dog’s astute color analysis. The first practice of the little league season, when kids get their t-shirts and begin to bond with their uniform number. Tommy Lasorda. Sunflower seeds. Eye black. Pitchers who show no emotion. Overly emotional pitchers. Batting averages. Box scores. When the home team trots onto the field in the top of the first inning. Francisco Cabrera and Sid Bream. Grown men and women wearing shirts with the names of their favorite players on the back. Ticket stubs in my 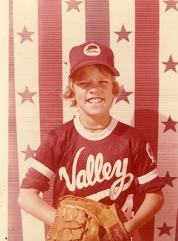 father’s mirror over his dresser. Kids seeing “the wave” for the first time. Fans high-fiving perfect strangers around them after a home run. Barehanded plays. Taking the whole family to see a minor league game, in good seats. Dirt dogs. Relief pitchers who sprint in from the bullpen to the mound. Starting pitchers who stay in the dugout after they’ve left the game. October. When someone in the dugout throws a ball to the first baseman who’s running off the field. Nolan Ryan. Pinch hitters. Double-switches. Pine tar. Batting gloves in the back pocket. Ripped uniform pants. Spectators at “over-40” amateur baseball games. High schoolers who can hit 90 on the radar gun. Pitchers who shake off three or more catcher’s signals. Catchers who call time out to tell pitchers who shake off their signals to throw the damn pitch they called. Dan Gladden. Complete games. The words, “I can’t use my tickets tonight, would you like to go to the game?” Homers that clang off the foul pole. Opening Day. Vin Scully. Joe Garagiola. Curt Gowdy. Ned Martin and Jim Woods. Jon Miller. Deer-in-the-headlights pitchers on the mound for the other team in critical situations. Mana

gers who go out to argue with the intent of getting tossed. Knee-buckling curveballs. Home team pitchers who induce a swing-and-a-miss on a fastball that everyone in the stadium knew was coming. Taped fingers. Trivia. Opinions about who belongs in the Hall of Fame. Derek Jeter. Dave Roberts. Anything can happen. Triple plays. A walk-off balk. The hyperventilating rush of watching a ball I’ve hit curl down the third base-line for a potential double. Bill James’ Baseball Abstract. The day pitchers and catchers report to Spring Training. Game 7s. The authenticity and excitement of the Yankees-Red Sox rivalry. Rookies making their first major league appearance. Watching the game from “standing room only” and feeling as lucky as anyone in box seats. Wiffleball.

Memories of my own glory days and goat days on the diamond. Players who sign autographs for kids… all the time. When a left-handed hitter strokes a hit off a left-handed reliever who was brought in to face one batter. Pitchers instinctively covering first base on ground balls hit to the right side. Pitchers who back-up third. Ichiro. Hot stove talk in December. Trade offers in fantasy baseball. Those incredibly rare little league coaches who make every kid feel special and aren’t in it for their own competitive reasons. Holding tickets to Fenway in my hand. Hitting streaks kept alive on the final at-bat. Player superstitions. Rally caps. Baseball card collections in shoe boxes. Ninth-inning miracles. Outfielders who get a jump on the ball before it’s even hit. The bleachers. Taking the T to the game. Curses obliterated. Pepper. Former power pitchers winning with finesse. Holding a 32 or 33-inch bat in my hands. Hitters battling the twilight shadows between home plate and the pitcher’s mound. Managers who don’t believe in “letting the pitcher work himself out of a jam.” When ball girls, ball boys, and base coaches toss foul balls to kids in the crowd. Kirk Gibson.

8 responses to “What I Love About Baseball”