Evolution of a Red Sox Fan: Stages 3 and 4

My last article discussed stages 1 and 2 of the four stages of evolution of a Red Sox fan. Now, it’s time to take a close look at stages 3 and 4. As I said earlier, no stage is better or higher than another (indeed, I wish I’d stayed in stage 1 forever) and all fans at all stages are equal in their Red Sox Nation citizenship. (Did you go through a stage that could be described differently? I’d love to hear about it.)

Stage 3: Prioritization, Re-calibration, Sacrifice Stage 3 is the hardest one to enter, because it requires a complete overhaul of one’s habits and values regarding focus on baseball. This is the stage when we learn how to integrate our passion for the Red Sox with our desire for solid, long-lasting relationships with people who don’t share our Red Sox obsession. Some consider stage 3 to be evidence of fan regression, not evolution. (I do see their point.)

When our spouses, significant others, and children (who, although we love them, are occasionally “significant interruptors”) request our undivided attention when the game is on; when we’re absorbed in the pages of the Sunday Globe or Herald; when the World Series pre-game show has just begun; when we’ve got tickets and we’re running out the door — we are facing a stage 3 moment. In this stage, a Red Sox fan can either take a deep breath and calmly engage with the significant interruptor, or cling to the die-hard-fan mentality, blow-off the significant interruptor, and strain or destroy his/her relationships. A genuine stage 3 fan has learned to manage his expectations about how much time he will be able to spend “being an active fan,” and recognizes the moments when he’s torn from his fan experience as “critical relationship-defining junctures” and “necessary baseball sacrifices.” Every fan who enters stage 3 and re-calibrates his priorities is destined for long, contented interpersonal relationships, a degree of baseball starvation, and a dependence on Tivo.

I had a stage 3 moment last Tuesday night after my wife and I had finished putting our four children (ages 8 to 1) to bed. While enjoying the fifth inning of the Sox-Orioles game on NESN, one of the four kids woke up, came downstairs, and asked me if she could watch a Dora The Explorer video. (She had fallen asleep at 5:00pm and we were hoping she’d sleep through the night…) The stage 2 fan in me felt a twinge of resentment and even wanted to say, “Nope, sorry darlin’,” and just endure the little girl’s woeful sobs. But the stage 3 fan in me won out, and 30 minutes of Dora’s Pirate Adventure ensued. I was proud of myself. For my “evolution.” 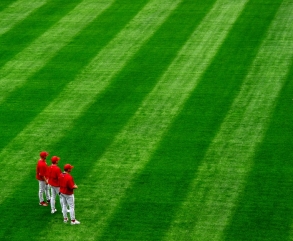 Stage 4. “I am one with baseball.”A stage 4 fan is one who, with an endless archive of Red Sox memories, has developed a philosopher’s appreciation of The Game; whose passion is ignited by the way a third baseman kicks the dirt between pitches; who knows the Red Sox will win another World Series in his/her lifetime, and it won’t be because of a particular managerial move or trade, but because the stars align and the players get on a roll; who sees baseball as a metaphor for numerous truths and paradoxes of the natural world; who can thoroughly enjoy watching any major or minor league team play, and indeed, can get as much enjoyment from watching a local little league game as from a Red Sox game; who reveres a slick-fielding, reliable shortstop with superior range (regardless of his ability to hit) as much as a dominant closer or triple-crown contender; whose number-one reason for not wanting to miss an inning of any game is the fear that something will happen, the exact nature of which he’s never seen before; who understands completely that the Red Sox are a business, but who still sees the magic in baseball and the majesty of Fenway Park; who is grateful for the chance to watch Derek Jeter play, even though he’s a Yankee; and who is deeply moved by baseball’s unparalleled capacity for enchantment, particularly in the hearts of children, and is on a quest to recapture his/her own innocent, child-like appreciation for the game (stage 1).

Stage 4 is sort of like becoming a baseball buddha. Of course, stage 4 encompasses all the other stages, because the stages are cumulative to some degree. But at the same time, stage 4 is absolutely distinct from the other stages. And by the way, only those of us who were fans in 1918 were able to access stage 4 prior to the last out of the 2004 World Series. (Now, we all can.) Perspective, appreciation, and sagacity are impossible when you’ve only experienced heartache your whole life and you actually wonder if curses are real.

Being the father of an 8 year-old Red Sox fanatic has launched me into the realm of stage 4. While my love for the Red Sox remains very personal, the most joyful aspect of my fan experience involves my oldest son (the other three haven’t caught the baseball bug yet). I am re-living stage 1 through him, and loving it even more this time around. I have witnessed first-hand how baseball has led my son to dream big dreams and believe anything is possible; how baseball fills his afternoons with hour upon hour of serious play; how being at Fenway engrosses him and engages his imagination in spectacular ways; and how Red Sox baseball has become essential common ground in our very close father-son relationship, ground to build on for years to come. (And now, I understand how much fun my parents had with me and my three siblings when we were stage 1 fans.)

One response to “Evolution of a Red Sox Fan: Stages 3 and 4”