Never Say “I Could Have Done That”

Images of a different, better future.

We all have five or ten compelling ones every day. Sometimes they hit us in the shower. Sometimes while we’re driving. Sometimes when we’re sitting in a meeting o 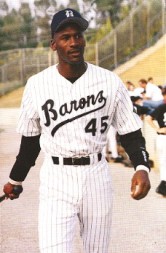 r while talking with a friend. Sometimes they wake us up at 3 in the morning.

And I bet at least one idea we have per day is one that, if acted on, could make a quantum, dramatic difference in our lives or the lives of others. It’s one that could help define our lives and our purpose on this planet if we could execute it. If only these gem-like ideas could be highlighted for us, and we could be guided by a higher power to follow-through on them immediately….

Frequently, I see the work someone else has done – the book or song they wrote that I know I could have created as well, the product they invented that I had the concept for a few years ago, the eye-opening presentation they gave at the conference, the physical condition they’ve gotten themselves into and the accomplishments they’ve achieved because of this – and my impulse is to say, “Well, I had could have done that, too.”

I love the example of Michael Jordan’s short baseball career for two reasons:

1. Michael says he always dreamed of being a major league baseball player and believed he could compete at the highest levels in that sport. Most of us forget that he retired from the NBA as reigning MVP in order to follow through on this dream and start a new career in baseball. Is there a better example of never saying, ‘I could have done that?’ That was one of the most inspiring career leaps I’ve ever seen.

2. M.J. never made it to the majors, but you won’t hear Michael say, “I could have done that,” while watching David Ortiz or Ichiro Suzuki hit a 97-mph tailing fastball for a game-winning hit. He tested out his idea and learned that baseball was much harder than he imagined. But, at least with regard to this single idea, Michael can sleep at night knowing he didn’t let it die in his head.

Then there’s my sister-in-law, Christina Harding. She heard about the Antarctica Marathon a couple of years ago and said to herself, “I never want to just say, ‘I could have done that.’ Therefore, I must do it.” Last week, she competed in the Antarctica Marathon. Like Michael Jordan, she can now say, “I followed through on my idea.” Unlike Michael Jordan, Christina can also say, “And I reached the pinnacle.” Because she won, defeating all other female entrants in the race and passing two competitors in the race’s final two miles of glacier-covered terrain. Incredible.

I have learned to never say, ‘I could have done that.’ Because I didn’t.

2 responses to “Never Say “I Could Have Done That””